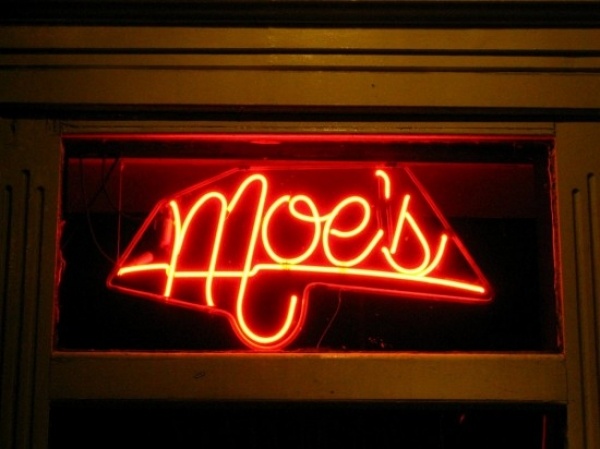 It was 6 p.m., and after a long, boring Wednesday at the office I hopped off at the G train two stops away from mine, at Fulton Street. I’d stopped here often over the last nine months or so, to grab a drink at Moe’s before I headed home.

I’d started coming to Moe’s on a rumor that my editor had sent me to sniff out, about some shady business behind the 10-year-old bar’s closing. Originally slated to shutter in February, Moe’s had an extended, and sometimes tense, negotiation process that finally ended in late April, after the owners—Ruby Lawrence and Chelsea Altman—couldn’t reach a deal with the landlord. He was more than doubling the rent, and he seemed to be eager to bank on the proximity of the spot to the new arena being built in downtown Brooklyn.

As I followed the story of Moe’s, I got to know, and drink with, the regulars. Like Brian, whose shaved head, earrings, tight black T and tattoos threw newcomers off the scent of his genuine sweetness. Or Peaches, the flamboyant college professor who brought down the house on karaoke nights. Or Ruby, the owner, who you could find tossing a couple back at happy hour on Wednesdays, which were “lodge nights”—a night few of the Moe’s family ever missed.

But yesterday, as I climbed the steps to the street, I knew I wouldn’t be getting a taste. Although the day I had truly warranted one, the new bar that was having its opening night party at the old Moe’s didn’t yet have a liquor license. Plus, I was boycotting.

According to the flyers that had recently been circulating the neighborhood, the new bar’s name was going to be… Mo’s. “It was the shot heard around Fort Greene,” said Butch Johnson, my favorite bartender from the old Moe’s. “I don’t get it, don’t feel it, don’t understand it.”

Butch told me this as we sat across from each other at one of the four crowded picnic tables across the street. Ralph, of Ralph’s bodega directly in front of Mo’s, painted the tables last week and set them up so the regulars would have a place to sit. They brought signs, they brought cognac-and-peach-juice punch, they brought matching Moe’s shirts. And they protested.

“It’s just a low-class, low-creativity move,” Ron Worthy told me. “With all the opportunity here, you’d think it’s the last thing they’d wanna do, to disgrace the name of something that was real.”

Ron said the regulars had all been missing Moe’s, a place they referred to as HQ due to it’s central location to their homes. “I might’ve considered going there in like four months, until this name thing,” he said. “It’s a slap in the face to the things we collectively built and cared about.”

The new owner of Mo’s, Calvin Clark, said he didn’t think using a version of the old name was a big deal. “I would say a small fraction of the regulars might be upset,” Calvin said. “I can’t really understand why. I’ve lived around here for 25 years. The ownership changed, but what made Moe’s? The people. Not me, not my business partner.”

I spotted a familiar face at Mo’s among the unfamiliar new décor of refurbished wood and TVs. Alex Salas, a bar back for Moe’s for the last 2 months before they closed, told me he decided to stay on as a doorman.

“They called me to work, and I’m happy to work,” he said. But for many former Moe’s employees, that wasn’t an option. “It’s like crossing a picket line,” Butch said. “I could have to go to the bathroom so bad I would urinate on myself, and I still wouldn’t go in there.”

I sat with the regulars on the benches across the street, among signs of former owner Ruby Lawrence’s face melding into the iconic Che Guevara image with the slogan “Resistance!” I listened to a bunch of what might seem like unlikely good friends—young, balding, gay, black, Asian—all reminiscing over the ill-fated Flaming Moe shot (“I lit the bar on fire like ten times,” Ruby said) and the night of the 2008 election and the days they gathered there after 9/11. Rain started sprinkling down and there were murmurs about where the after party would be. It seemed clear that although the Moe’s family may have to make a little bit of a trek on what is now a rotating Lodge Night (they’ve been seen at Hot Bird and Hanson Dry), none of
these regulars will ever cross the threshold of the new Mo’s.

“They say it’s an homage? That’s bullshit,” Ruby said. “I’m fine about the rest of it—hey, you can pay more rent. But just don’t use my name.”