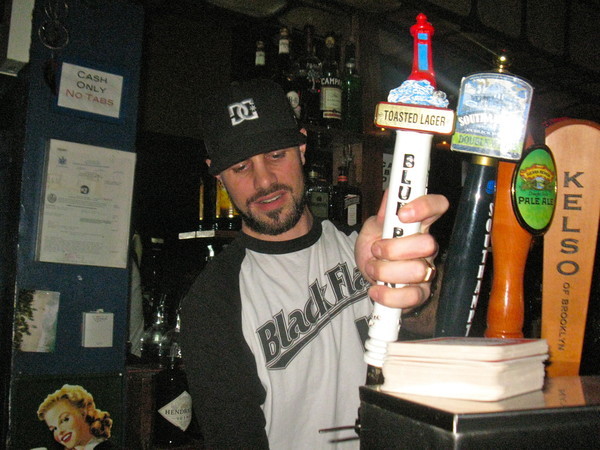 The bar was due to close at the end of the month, but now will be open until at least May 1.
By Roxanna Asgarian
First published in Fort Greene Patch on February 18, 2011

The taps at Moe’s Bar have not run dry just yet.

The owners of the popular bar at Lafayette Avenue and S. Elliot Place, which was slated to close at the end of the month, have announced their plans to stay open at least until May 1 while they continue negotiations with their embattled landlord.

“I thought it was closing, so I was in here every day the past couple weeks for a beer,” said Jay Twitchell, a regular since the bar opened in 2001. “It’s good news that they’re staying open.”

Moe’s Bar Family Facebook page sent out an invitation yesterday to hundreds of Moe’s fans, letting them in on a party scheduled for February 26.

“A few days ago this was going to be Moe’s closing-night party, but now it is our ‘we’re-staying-open-for-two-more-months-at-least party!’” the invite said.

Rumors of negotiations had been swirling around the beloved bar in the last weeks, and many regulars were holding hope for “eleventh hour negotiations,” between the building’s landlord, James McDowell, and the owners of Moe’s, Ruby Lawrence and Chelsea Altman in the last two weeks.

Lawrence and Altman have kept quiet during negotiations despite several attempts to reach them, but McDowell recently sounded a hopeful note.

“It’s business, it’s nothing personal,” McDowell said. “We’ve had our differences, but it always should be called business.”
He added that he has two other offers on the table for the space, but if they fall through he would be willing to accept a compromise with the bar’s owners.

While McDowell continues negotiations with his tenants, he must also contend with the more immediate concern of his arraignment on sexual assault and kidnapping charges is scheduled for Feb. 22 in New Jersey.
But for now, they aren’t shouting last call at Moe’s just yet.

“I am pleased as punch,” said bartender Butch Johnson. “If we get a lease that works, then yay! Bravo! I think it’s good.”

Beating Around the Bush
peein’ on the seat.