By Roxanna Asgarian on February 16, 2011 in CULTURE 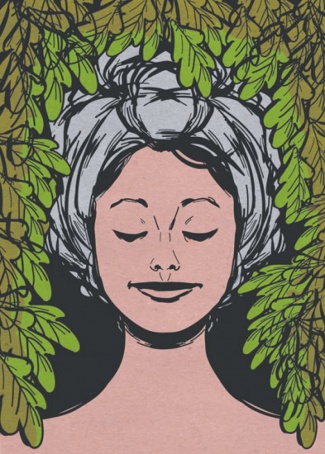 ROXANNA ASGARIAN wanted a relaxing experience. Instead, she received a massage with no happy ending.

I WAS HAVING A hell of a week. The muscles of my body had been gripping my insides even as I slept, so I decide to splurge and get a rubdown. I walk into a Turkish bath and spa in Clinton Hill and try to get them to squeeze me in for a massage. The girl up front tells me all they have open is the “platza.”

“Is that the thing with the bushes?” I ask. I’d heard some rumors about brooms and beatings.

“Ahh, it’s really not too bad,” she assures me, so I sign up for 3 o’clock and head into the bath.

While there, I see the masseur in action in the steam room, rubbing his 2 o’clock client with salts. I heard his accent in there, and I imagine at the end of the massage I’ll look at him and ask, “What’s your name?” And he’ll coldly reply, “Igor.”

After spending some time in the steam room, I get some water and sit in a lounge chair with a direct view of the hot tub and the cold plunge pool. I’m kind of lost in my head when I see the girl ahead of me come out of the Russian sauna. She sits with her feet in the plunge pool and “Igor” disappears for a minute. Then, Whoosh. Igor throws a large bucket of ice water right against the girl’s back. Picture the winning coach after the Super Bowl. I gape. Nobody told me about the bucket of ice!

I’m still nervous when the masseur directs his client to lie next to me. She reclines in her robe on the lounge chair, and he wraps her head and feet in towels and rubs them. “Take a nap,” he commands.

“Why?” “Because I’m your 3 o’clock and nobody told me about the ice water.”

“Don’t worry about it,” he says and smiles.

We start in the steam room on a black table covered with towels. He comes in with a pho soupsized bucket of salt. “What’s your name?” he asks. “I’m Ben.”

Ben? Surely this man is an Igor. I mean, OK, he’s pretty scrawny, with tattoos and long, brown hair. He kind of resembles your local video store clerk (when those existed).

He proceeds to rub me down with the salt. He’s telling a joke— presumably to the couple of other men sitting in the steam room— but I miss the point. Maybe it was something sexist. I’m trying to focus on his hands, kind of giggling at the awkwardness. He leans into it. He rubs as if the salt wasn’t there. It doesn’t hurt like I was afraid it might. Although I had shaved my legs a couple days beforehand, the salt only leaves a slight sting as he rubs.

“Is this an angel?” he asks, pointing to the large tattoo on my ribcage. I nod. “Why is she so lonely?” “She’s just thinking,” I say. After the rubdown, I shower off and wait for about 10 minutes outside the bath, cooling my body off. I see Ben preparing the two bushels of oak leaves. He looks up at me, and we head into the stone-walled sauna. It’s 185 degrees.

He has sheets and towels covering the wooden planks, and he throws buckets and buckets of cold water on them. He instructs me to lay face down. It’s almost unbearably hot.

He wraps my head in a cold, wet towel.

I teeter between the idea that this is an invigorating, wild experience, and the idea that it’s the kind that might kill you—like those hippies in the sweat lodge.

But I’m in here. And there’s no turning back.

He soaks the leaves and lets them hang over me and drip. Then, th-WACK. Slaps against my back. Brush-brush, th-WACK. My pores are open from the salt scrub and the extreme heat and beating of leaves. He pulls my bikini bottoms halfway down my ass and beats the bushels of oak leaves, with varying degrees of pressure, up and down my back.

Then he douses me with cold water.

It’s shocking, but my body is thankful. My flesh is like putty, supplicating, waiting for him to re-soak the cold towel. He douses himself with half of a bucket of cold water, and I lean forward, thinking the rest is for me. But he uses it on himself.

I ask him if he’ll soak my head towel again, and he takes it away, places his knee between my legs and rubs my back as I lay face down, with his hands covered in coldwet mitts. He asks me to sit up and face him, bare my chest.

He walks me out and leads me to the pool. I know what’s coming, but I don’t mind as much as I thought I would. I’m really fucking hot and totally overwhelmed. I put my feet in the cold pool.

He pours the ice water on my shoulders first, and then tosses the rest against my back. He instructs me to get all the way in the cold-plunge pool, so I dunk my head. After I step out, he wraps me in my robe and guides me to a lounge chair. I recline as he rubs my head and feet and wraps them tightly with towels. That’s when he says, “Better than sex, right?” I just look at him. Actually, no, it was nothing like sex. But all this body-numbness makes me feel like I’m on some sort of drug.

He says, “You should take a nap.” Then he covers my eyes with a towel, and I half-nap, half-bask in the feeling.

Afterward, I dress in the locker room, and when I’m done Ben’s waiting for me outside as I walk out. He’s smoking a cigarette, holding one for me. He asks to buy me a drink, and I wonder if he usually does this. But I let him buy me a bourbon at the Mexican place next door.

I don’t know why, but I give him my number and tell him to come see my friend’s band play in a couple weeks. But I know I don’t really like him, though, and I won’t go.

I’m so sore that night I can hardly move. I sleep hard and wake reinvigorated. I know he’ll be texting me. But no matter what, I won’t go back.

Last Call at Moe’s?
Moe’s Serves Another Round — For Two Months