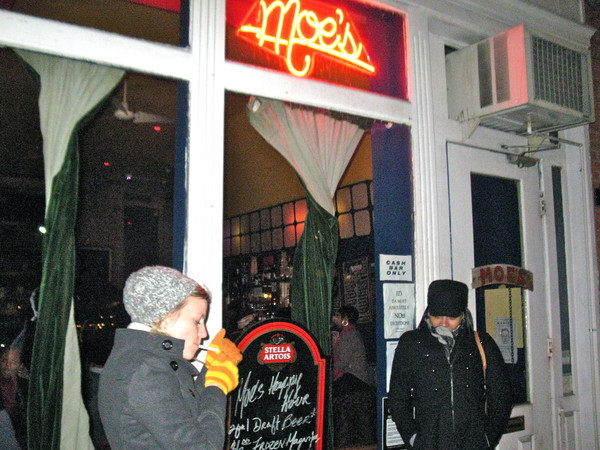 Owners are making one last attempt to negotiate with their landlord, who is beset with legal troubles.
By Roxanna Asgarian
First published in Fort Greene Patch on February 11, 2011

The owners of one of Fort Greene’s most popular bars have entered into last minute negotiations with their landlord — who is facing charges of rape and kidnapping—in a final effort to save the watering hole before it closes its doors permanently at the end of the month.

No closing date has been set for Moe’s, the ten-year old bar that’s become somewhat of a neighborhood institution, even though their lease ends Feb. 28.

“There’s always these eleventh-hour rumors you hear, but it’s hard to know what the outcome will be,” said Randy Mish, a longtime Moe’s patron and friend of the owners.

The initial negotiations went stale last November, when the landlord, James McDowell, more than doubled the asking price for rent. But with McDowell’s recent arrest and charges stemming from an incident that occurred at his Englewood, New Jersey home last September, he has more on his mind than Moe’s.

As The Local reported in November, a woman called police on Sept. 29 of last year and said she had escaped McDowell’s home after he had sexually assaulted her and held her captive there. After repeated attempts to summon McDowell from inside his home, police threw a chemical agent through his window and arrested him. McDowell posted $500,000 bail in early October, and was indicted on charges of rape and kidnapping Dec. 29.

According to the Bergen County Prosecutor’s Office, McDowell will be arraigned in Bergen County Court Feb. 22, right around the time Moe’s will close its doors — if it does, in fact, close. When asked about the charges in November, McDowell said he was innocent.

“I knew some grimy people,” McDowell said. “They thought, I’m close enough to him to set him up.”

Efforts to reach McDowell again — as well as the owners of Moe’s negotiating with him — were to no avail.

In the decade since the bar opened its doors, Moe’s has become headquarters for neighborhood drinkers of varying races and social classes. On weekends, one could expect to see groups of big black men interspersed with middle-aged white guys, all of them bumping their heads to a RATATAT mix of an old Biggie single. While some residents think of the bar as a symbol of the gentrification in Fort Greene, other loyal patrons say this diversity is what sets the bar apart from the rest.

The Facebook page for Moe’s describes itself as a “bar family.” Some of the regulars are still holding out, while others have come to terms with the demise of their favorite hangout. Bar manager John Ryan says there will be an upcoming celebration, regardless of the outcome.

“Oh yeah,” Ryan said, “There will definitely be a party.”

Moe’s to Close After Negotiations Falter
Beating Around the Bush