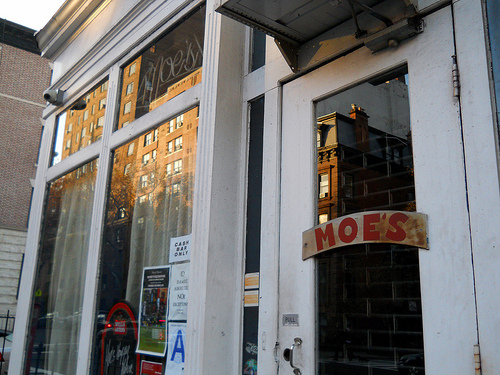 James McDowell has no desire to save Moe’s.

The beloved bar has been a staple Fort Greene watering hole since it opened in 2001, and serves a large group of neighborhood regulars who are sad to have to say goodbye to Moe’s when the lease is up at the end of February.

Mr. McDowell, the owner of the building, said an unpaid gas bill is the reason, while the owners of Moe’s said they simply can’t afford the new asking price for rent, which has more than doubled from what they’ve been paying. Both parties confirm they are no longer in negotiations.

Mr. McDowell acknowledges that people love the place, but claims he has four other offers on the space.

“It’s out the door though,” Mr. McDowell said in an interview at Moe’s, where he showed up to meet with a real estate agent. “These other people will take it with all the stipulations.”

Mr. McDowell, who recently posted a $500,000 bail bond stemming from an arrest at his home in New Jersey, said his legal fees did not factor into his negotiations with Moe’s.

Police arrested Mr. McDowell at his home in Englewood, N.J. on Sept. 28, after throwing a chemical agent into his window, ending a standoff that lasted hours.

Deputy Chief Lawrence Suffern of the Englewood Police Department, confirmed that a 45-year-old woman had called police earlier that night, saying she had escaped from Mr. McDowell’s house after being sexually assaulted and held captive there.
The call brought police to Mr. McDowell’s home. They arrested him and charged him with aggravated sexual assault, kidnapping, possession of a firearm for an unlawful purpose and making threats to kill.

Mr. McDowell, who owns his home in New Jersey and the building on 80 Lafayette Avenue, posted a $500,000 bail bond Oct. 9. He pleaded not guilty, and says the woman set him up.

“It’s a sensitive situation,” Mr. McDowell said. “What people think they know…I’m out on these streets. It doesn’t have anything to do with Moe’s. When you have money, you’re the target.”

Moe’s opened in June 2001, and was the first business venture of high school friends Ruby Lawrence and Chelsea Altman. Ralph Jawad, who owns Ralph’s Bodega across the street, is sad to see them go.

“I watched Ruby and Chelsea build the place up,” Mr. Jawad said. “Moe’s just became part of the neighborhood — in front of Ralph’s is Moe’s. I really, really hate seeing them go.”

Ms. Lawrence said the rent negotiations began months before Mr. McDowell’s arrest and ended at the beginning of November when Mr. McDowell and Moe’s could not reach a deal.

“There were little glimmers of hope here and there,” Ms. Lawrence said of the process, “but ultimately, there wasn’t much negotiating in the negotiations.”

Mr. McDowell said the owners owe him $30,000 in gas bills for their use of his gas line that heats the upstairs tenants’ homes. The bar’s manager, John Ryan, said he doesn’t think that’s accurate.

“Show me some documents. That’s the way business goes,” Mr. Ryan said. “Show a bill, and we pay it.”

Mr. Ryan, and other regulars at Moe’s, are upset and angry about the loss of their beloved bar.

“We call this place HQ, for ‘headquarters,’” said Randy Mish, who has been a patron of Moe’s since it first opened. “There is no replacement for Moe’s. It’s been one big-ass happy memory.”

Ms. Lawrence said the bar plans on staying open as long as they can, but they have to be out by Feb. 28. She said they’ll go out with a bang, and of course, let the community in on their goodbye plans.

“There are definitely going to be some nice parties, some DJs we haven’t had in a while,” Ms. Lawrence said. “The family and community have been wonderful to us, so we want a fitting thank-you and goodbye.”