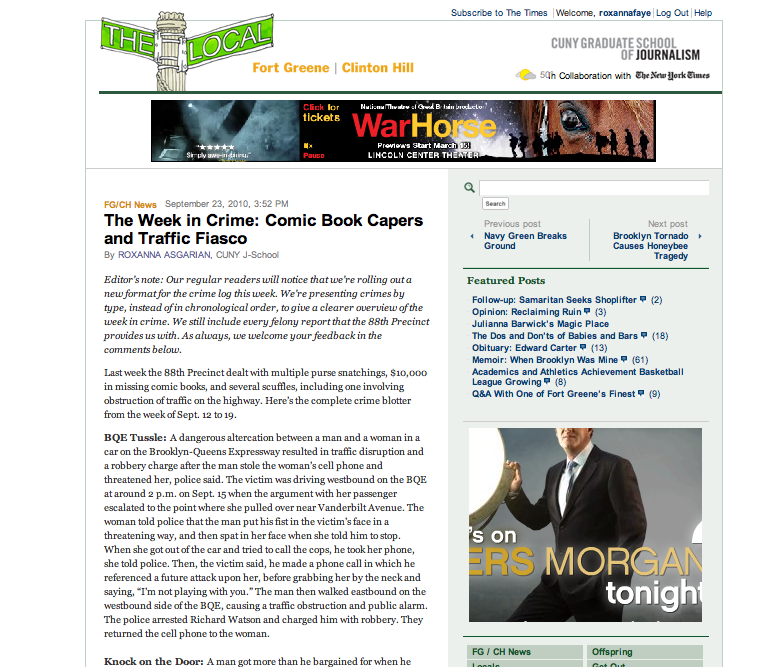 First published in The Local blog of the New York Times, September 23, 2010

Last week the 88th Precinct dealt with multiple purse snatchings, $10,000 in missing comic books, and several scuffles, including one involving obstruction of traffic on the highway. Here’s the complete crime blotter from the week of Sept. 12 to 19.

BQE Tussle: A dangerous altercation between a man and a woman in a car on the Brooklyn-Queens Expressway resulted in traffic disruption and a robbery charge after the man stole the woman’s cell phone and threatened her, police said. The victim was driving westbound on the BQE at around 2 p.m. on Sept. 15 when the argument with her passenger escalated to the point where she pulled over near Vanderbilt Avenue. The woman told police that the man put his fist in the victim’s face in a threatening way, and then spat in her face when she told him to stop. When she got out of the car and tried to call the cops, he took her phone, she told police. Then, the victim said, he made a phone call in which he referenced a future attack upon her, before grabbing her by the neck and saying, “I’m not playing with you.” The man then walked eastbound on the westbound side of the BQE, causing a traffic obstruction and public alarm. The police arrested Richard Watson and charged him with robbery. They returned the cell phone to the woman.

Knock on the Door: A man got more than he bargained for when he answered the door of an apartment on Steuben Street early in the morning of Sunday Sept. 19. Someone knocked, and when the man opened, he was stabbed twice with a kitchen knife — once in the hip and once in the shoulder blade. The attacker then fled in a black sedan.

Comic Book Theft: A man returned to his storage unit on Flatbush Avenue on Sept. 13 for the first time in a year to find two crates holding $10,000 worth of comic books missing from his padlocked unit.

Police Officer Andrene Sargeant, a community affairs officer at the 88th Precinct, said these purse-snatchings are quite common, especially from the backs of chairs at restaurants and bars. She recommended patrons stay aware and not leave their belongings, even for a moment.

“There are opportunists around here who make a job out of thinking of ways to swindle people,” Officer Sargeant said. “If you leave stuff around, it’s a ‘gimme’ for these people.”

Jumped: A gang of a dozen men jumped a man as he walked through Fort Greene Park at around 6 p.m. on Tuesday Sept. 14, police said. The men punched and kicked the victim and stole his phone and wallet.

A similar incident took place Saturday Sept. 18, when four men approached a man as he was walking by Andy’s Wine and Liquor on Myrtle Avenue late at night. They punched the man and took his wallet from his pocket.

Assault at the Tillary Shelter: Two women got into an altercation in the cafeteria of the Tillary Street Women’s Shelter, for women with mental illness or substance-abuse problems, on the morning of Friday Sept. 17. Police said Dechanelle Stewart hit the victim in the face with a radio, sending her to Brooklyn Hospital for treatment of bruises under her right and left eyes. Stewart was arrested two days later and charged with assault.

Storage Unit Swipe: A woman reported items missing from her storage unit on Atlantic Avenue on Sept. 18. The woman said she had placed a padlock on the entrance weeks ago, but when she returned to it last week the lock had been replaced by a similar padlock, and $1,450 worth of her belongings, including a laptop and camera, were gone.

Big Bully: A 16-year-old boy was arrested and charged with robbery after police said he shook down a 14-year-old boy. The 16-year-old approached the victim at about 4:50 p.m. on Greene Avenue on Tuesday Sept. 14th., police said. He put an arm around the younger boy’s neck and said, “Run your pockets,” police said. The victim tried to get away, but the older boy held him and went through his pockets. When the victim broke free, the attacker punched him in the back of the head.

Fancy Thief: A man noticed that three Rolex watches and a Louis Vuitton duffel bag, valued at more than $27,000, were missing from his home on Adelphi Street, and he reported it to the police Saturday Sept. 18. He said he didn’t know when the items were stolen or how the thieves got in.

Break-Ins: Multiple items turned up missing from other homes and stores in the area last week.

Subway Snatch: A woman heading home on a northbound Q train had her BlackBerry snatched right out of her hand around midnight on Friday, Sept. 17. She told police a man reached into the subway car at the Atlantic Avenue stop just before the train doors closed.