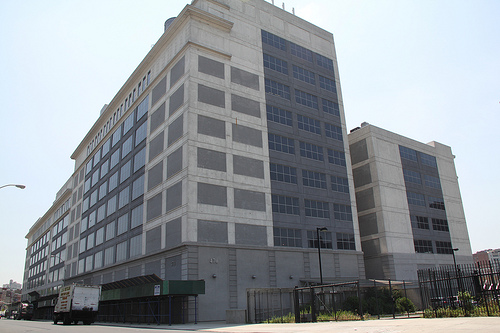 Published September 16, 2010, 7:51 PM in The Local blog of the NYTimes
By ROXANNA ASGARIAN, CUNY J-School

In an about-face, Community Board 2 gave their stamp of approval Tuesday to a plan to lease parts of a block-long building on Vanderbilt Avenue for use as a welfare services center.
The Human Resources Administration hopes to lease two floors of 470 Vanderbilt Avenue to accommodate about 1,800 workers and 1,500 clients for its food stamp center, domestic violence offices and job training programs.
The proposal will now be considered by the City Planning Commission at a Sept. 27 Review Committee meeting, a spokesperson for the HRA said.
470 Vanderbilt is a 470,000 square-foot building that was converted from a tire factory in the early 2000s. If the HRA’s 20-year-lease is approved by the city, the agency will move two existing centers, one on Livingston Street in Brooklyn and the other on 34th Street in Manhattan, into the larger space.
The vote passed Community Board 2 Tuesday night with 27 in favor and one opposed. Board member Lawrence Whiteside said the selling point was the influx of business from employees.
“The idea of 2,000 additional customers to Fort Greene restaurants and shops is critical at a time like this,” Mr. Whiteside said.
Carmen Boon, a spokesperson for the HRA, said the new location would help them better serve the clients in the area.
“The plan to move some offices to 470 Vanderbilt will provide convenience to clients and cost savings for the city,” Ms. Boon said.
The vote was a reversal of the board’s previous decision. In June, the members voted almost unanimously to ask the City Planning Commission not to approve the HRA plan. Community members voiced concerns about the effect the center’s clients would have on the neighborhood as well as about parking.
After that decision the HRA announced that the agency was withdrawing its plans to lease the office space. Officials have since reworked the plan around the community board’s concerns and rallied support from community organizations such as the Fort Greene Association and the Pratt Area Community Council. Letters of support from both groups were presented at Tuesday’s meeting.
Board members said their change of heart was based on new information that the HRA presented, including estimates of revenue the additional workers could bring into the area.
“The first time they came to us, they didn’t have answers,” Mr. Whiteside said. “Then, they came back with answers. What’s most important right now is the economy, and the additional revenue that can be generated in the area.”
The Fulton Area Business Alliance has also pledged their support of the HRA’s move. FAB Manager Phillip Kellogg said the customers that the center could draw would be a boon to nearby businesses.
“The additional foot traffic from these New York City employees coming to work every day would provide a terrific boost to the locally-owned businesses of Fulton Street,” Mr. Kellogg said. “The positive impact – including more jobs – will extend up and down the district.”
Katrine Pollari, who owns Olivino Wines on Fulton Street, attended Tuesday night’s meeting to vocalize her support for the city’s plan.
“Since I bought the space, the block has been a dead zone,” Ms. Pollari said. “I look forward to people occupying the building. There need to be more bodies in the area to get more business.”
Ms. Pollari brought in the signatures of five other area businesses who pledged support for the plan.
A representative from the Department of Transportation explained the city’s plan to free up more than 100 parking spaces on Atlantic Avenue, by changing the regulations that are currently in place. A shuttle bus for employees will run from the Atlantic Avenue-Pacific Street stop directly to the building during rush hours. To address concerns about the center’s customers loitering nearby, the HRA assured the board that the center’s entrances will be limited to areas that aren’t beside residences. The center plans to open its doors thirty minutes early so that clients can wait inside.
Perris also said the board and community members who opposed the plan may have been expressing “not in my back yard” feelings.
“I think there was some NIMBY-ism in June, and that I think is a bi-product of not enough information,” Perris said. “When community boards don’t feel like they have the information they need to make a decision, they are safer in going with ‘no.’ Then, you rationalize the decision you already made.”