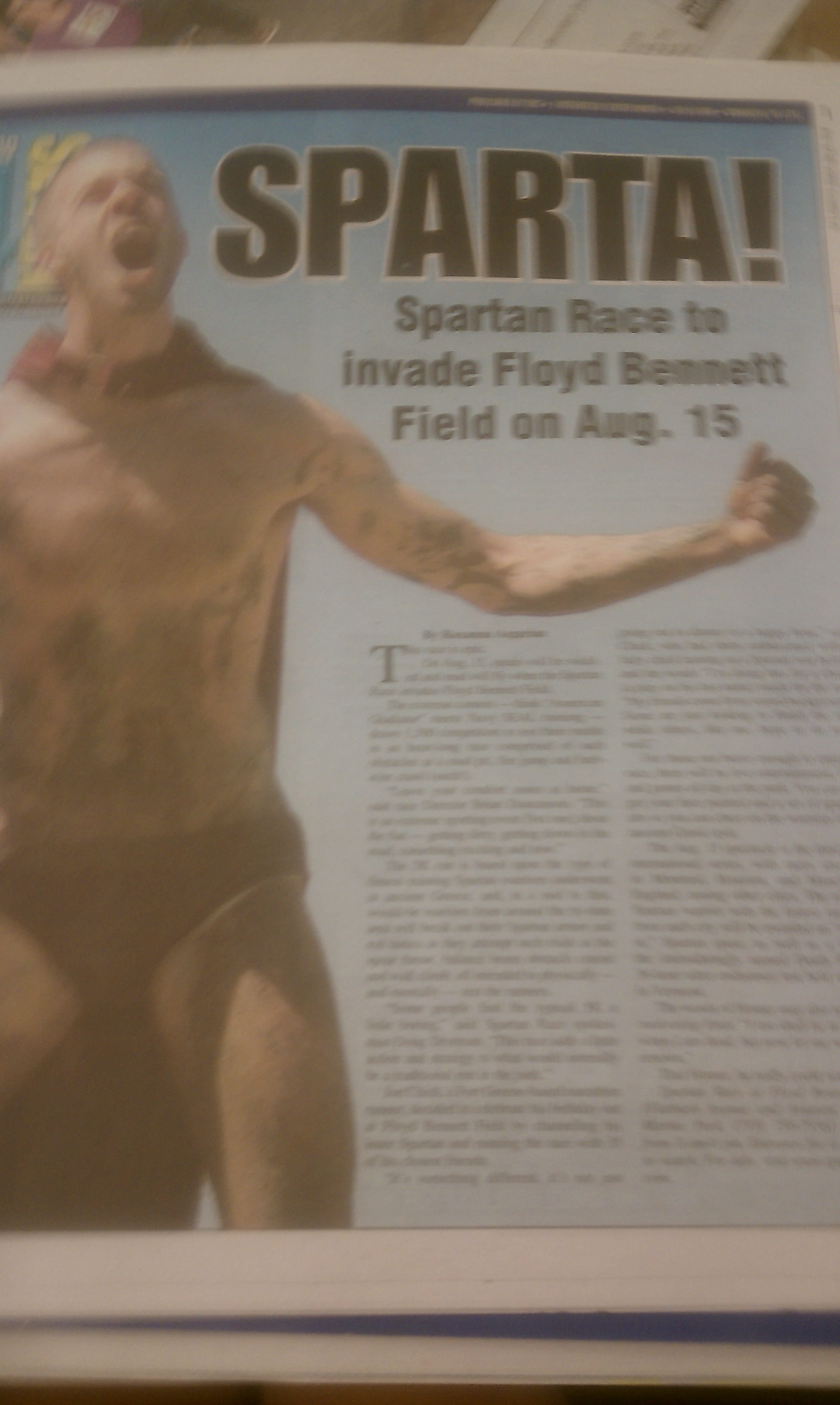 By Roxanna Asgarian
Published August 11, 2010 in The Brooklyn Paper/24sevenbrooklyn.com
This race is epic.

On Aug. 15, spears will be wielded and mud will fly when the Spartan Race invades Floyd Bennett Field.

“Leave your comfort zones at home,” said race Director Brian Duncanson. “This is an extreme sporting event [but one] about the fun — getting dirty, getting down in the mud, something exciting and new.”

The 5K run is based upon the type of fitness training Spartan warriors underwent in ancient Greece, and, in a nod to that, would-be warriors from around the tri-state area will break out their Spartan armor and red tunics as they attempt such trials as the spear throw, balance beam obstacle course and wall climb, all intended to physically — and mentally — test the runners.

“Some people find the typical 5K a little boring,” said Spartan Race spokesman Doug Drotman. “This race adds a little action and strategy to what would normally be a traditional run in the park.”

Joe Chick, a Fort Greene-based marathon runner, decided to celebrate his birthday out at Floyd Bennett Field by channeling his inner Spartan and running the race with 35 of his closest friends.

“It’s something different, it’s not just going out to dinner or a happy hour,” said Chick, who had shirts emblazoned with a baby chick leaning on a Spartan war helmet and the words “I’m doing this for a chick” (a play on his last name) made for the race.

“My friends come from varied backgrounds. Some are just looking to finish the race, while others, like me, hope to do really well.”

For those not brave enough to enter the race, there will be live entertainment, BBQ and games all day at the park. You can even get your face painted and a set of spray-on abs so you can cheer on the warriors in true ancient Greek style.

The Aug. 15 spectacle is the third in an international series, with races also held in Montreal, Houston, and Manchester, England, among other cities. The ultimate Spartan warrior with the fastest race time from each city will be awarded an “authentic” Spartan spear, as well as a spot in the intimidatingly named Death Race, a 36-hour ultra endurance test held annually in Vermont.

The words of Homer may also serve as a motivating force: “I too shall lie in the dust when I am dead, but now let me win noble renown.”

That Homer, he really could write.