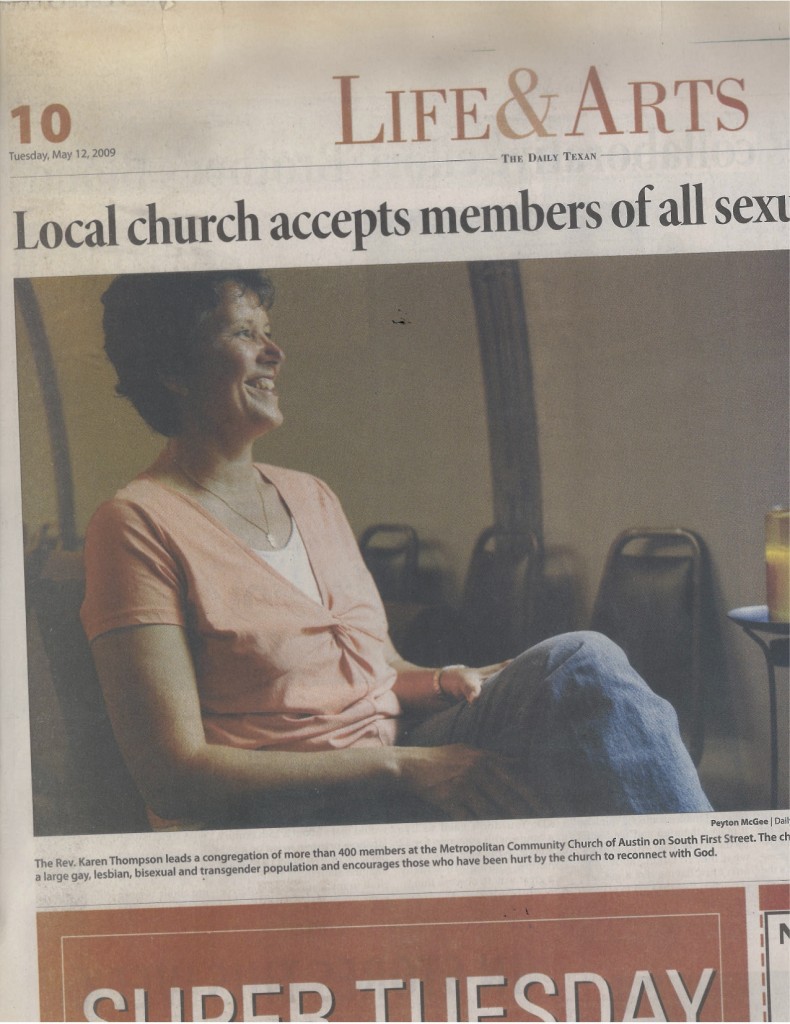 The Rev. Karen Thompson sits at her desk with her office door left open. Outside, in the Cowan Hall area of the Metropolitan Community Church of Austin, church members sit at tables and study the Bible.

Thompson will celebrate one year as the church’s senior pastor Sunday. Her congregation of more than 400 members embraces a Christianity that is “radically inclusive.” Many of the church’s members are gay, lesbian, bisexual or transgender.

Thompson’s spiritual journey to MCC Austin, like those of many in her congregation, was not easy.

Thompson graduated from Austin Presbyterian Seminary and in 2007 became the first openly lesbian candidate in the region to be approved for ministry in the Presbyterian Church.

Shortly thereafter, however, her candidacy was appealed to an ordination standard of the Presbyterian Church, which states that no non-celibate homosexual can be ordained to the ministry.

“I consider it a privilege to say my journey towards ordination wasn’t easy or taken for granted,” Thompson said. “I learned to follow my calling when it was not easy — sometimes I felt like it was just me and God.”

Thompson’s appeal reached the national level before she chose to withdraw her involvement and seek to minister elsewhere.

“I felt my presence had become more divisive than unifying,” Thompson said. “But the experience prepared me with the courage it takes to lead a body of people who are marginalized.”

Her experience with the Presbyterian Church led her to MCC Austin, which serves the community from a 10-acre plot of land on South First Street called Freedom Oaks.

A group of GLBT people interested in attending church in a safe environment started what was originally called the Austin Independent Community Church in 1975. Judy Cowan was 29 at the time and found the church through word-of-mouth.

“I was really looking for something to stabilize my life,” Cowan said. “I was in a position of uniqueness, as it were, and there was a lot of negativity being tossed my way. I wanted to find a place to go that was safe, where I’d be accepted.”

Cowan has been attending ever since. She has seen the transformation from small meetings in members’ homes to the bustling services that make up MCC Austin today.

The church has steadily gained popularity and now holds two Sunday services to accommodate its more than 400 members, as well as a Saturday evening “Comfortable Church” — a more relaxed service with a live band.

“Saturday nights were specifically designed to acknowledge many GLBT people who have been hurt by church, closed out or have given up,” Thompson said. “We want these people to have a chance to connect, or reconnect, with God.”

Thompson said many newcomers are surprised at how “normal” the worship services are. She said many come in conflicted — wanting to be spiritual yet feeling defensive of traditional Christian stances on homosexuality.

Biblical scholar Mona West addresses this conflict as part of the Wednesday night Bible study she leads at the church. She provides historical context on the evolution of the Bible and explains the many translations of it that are sometimes many steps away from the original Hebrew and Greek versions of the Old and New Testaments.

“Anyone’s translation is an interpretation,” West said. “It’s not that cut and dry. Some cite the passage in Leviticus that says a man shouldn’t lay with another man as an argument against homosexuality. But that passage also forbids eating shellfish and wearing clothes of mixed fibers.”

“It’s important to know the history and context,” West said. “Many things are written with a specific situation in mind, not for all time and all people everywhere.”

Some Biblical translations are formal, where translators attempt a word-for-word rendering, and others are dynamic, which try to capture in English the meaning of the traditional texts, West said.

She also said it’s important to acknowledge that translators have their own biases, which can be seen when comparing different versions of the Bible. West’s favorite translation is the New Revised Standard Version, which updates the English and eliminates the masculine-oriented language that is widespread in many other versions.

“Biblical scholars and translators have traditionally been white, European, heterosexual males,” West said. “But where are our voices? Each of us has our own authority and right to interpret scripture.”

Emily Brown, a 24-year-old UT alumna, recently became a member of MCC Austin. She said studying the Bible with West helps her to get the most from the scripture.

“She’s amazing at helping people see those negative verses and put them in context, and dispelling the meanings many have placed on them,” Brown said. “They really let you take from it what you need to take from it.”

“When I went to MCC, it was the first time I felt like I could be present at church, all of me, and I could be accepted by God and by everyone around me,” Brown said. “Being in that environment really solidifies and helps build up my spirituality and faith.”